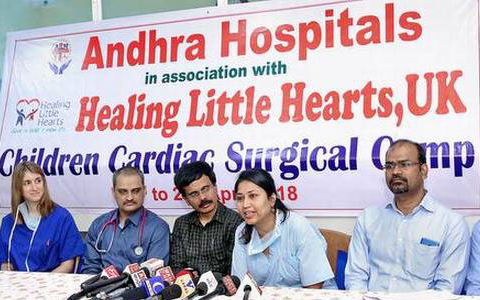 Andhra Hospitals Children’s Services chief P.V. Rama Rao told media that the number touched the 2000 mark with the completion of 14 heart surgeries performed by a 10-member expert team from from different hospitals in the UK and Italy this week.

Dr. Rama Rao said that the success rate of the Healing Little Hearts teams that have been performing surgeries was “nearly” 100%. He said that teams from UK had come to perform surgeries at the Andhra Hospitals 14 times.

Film star Mahesh Babu who was extending support to Andhra Hospitals visited the children who underwent surgery and at the earlier camps in the Heart and Brain Institute and interacted with them and their parents. Mr. Mahesh Babu was in the city to promote his new film on Friday.